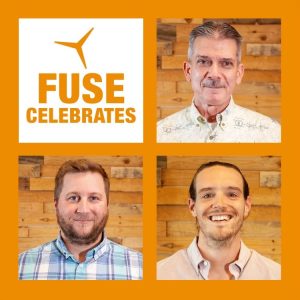 Today, Fuse announced the promotion of three engineers to align its hardware, software, networking, and system projects and programs for the company’s suite of defense communications, networking and computing products. Promoting Bill Cerny, Joe Daniels and Tim Gilmore is expected to further strengthen the company’s engagement with warfighters and the development of cutting-edge technologies that address key defense capability gaps.

“Bill, Joe and Tim have been instrumental in Fuse’s growth, providing their engineering expertise in service of our drive to provide the world’s best systems in service of the warfighter,” said Sumner Lee, Fuse CEO. “Their considerable and invaluable knowledge, drive and ability will be critical for Fuse as we continue to develop innovative networking and communications products for the defense industry.”

“Fuse’s shift to a product-focused company has meant an internal realignment of focus around the product suite,” says McAfee. “Bill, Joe and Tim’s ability, knowledge and expertise will help Fuse adapt and thrive as we evolve.”

Visit the Fuse website to discover its suite of communications, networking and computing products for defense organizations: https://www.fuseintegration.com/products/

Fuse today announced it has completed the first permanent installation of its Tactical Technologies Toolset at a U.S. Navy shore facility. T3, a remote network monitoring and management solution for multi-domain operations, was installed for the Naval Surface Warfare Center,

Fuse today announced that the company is exhibiting at the Naval Helicopter Association 2022 Symposium May 11 – 13 at the Marriott Norfolk Waterside Hotel in Norfolk, Virginia. This year’s event, themed “The Human Advantage,” will bring together organizations with

Fuse today announced from Sea-Air-Space 2022 that defense technology business leader Brad Feldmann has joined its Board of Advisors. Widely recognized for his transformational leadership as CEO at Cubic Corporation, where he expanded the company’s value and innovative technology portfolio,

Fuse announced today it has been awarded a spot on the U.S. Air Force $950M ceiling indefinite-delivery/indefinite-quantity contract for the maturation, demonstration and proliferation of capability across platforms and domains. The contract will leverage open systems design, modern software and

Read More »
Please note that our website uses cookies necessary for the functioning of our site, the optimization of our site’s performance, and for analytics. By clicking “Accept”, you agree to our use of cookies and/or similar technologies.
Do not sell my information.
Cookie settingsACCEPT
Manage consent

This website uses cookies to improve your experience while you navigate through the website. Out of these, the cookies that are categorized as necessary are stored on your browser as they are essential for the working of basic functionalities of the website. We also use third-party cookies that help us analyze and understand how you use this website. These cookies will be stored in your browser only with your consent. You also have the option to opt-out of these cookies. But opting out of some of these cookies may affect your browsing experience.
Necessary Always Enabled
Necessary cookies are absolutely essential for the website to function properly. This category only includes cookies that ensures basic functionalities and security features of the website. These cookies do not store any personal information.
Non-necessary
Any cookies that may not be particularly necessary for the website to function and is used specifically to collect user personal data via analytics, ads, other embedded contents are termed as non-necessary cookies. It is mandatory to procure user consent prior to running these cookies on your website.
SAVE & ACCEPT